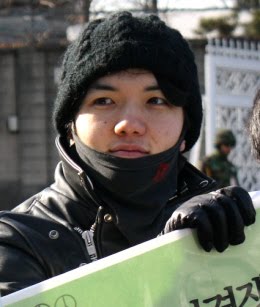 Ah! today as an Anarchist I refuse to fulfill my duty to the nation-state.

A human being turns into its true self from the moment it WANTS to become something. I wanted to become an anarchist ever since I was young. This is not because I was impressed by a new kind of Western knowledge and wanted to follow it, but it was the outcome of looking for my own goodness, during which I found a lot of similar ideas amongst those anarchists that have existed before me. If someone were to ask me what my ideals are – to be able to answer that without complexity I am borrowing the mask of anarchism. Even though the word itself is not enough to explain a lot of things that I don’t want to explain to you, the reason why I am introducing myself as an anarchist is NOT to run away from the responsibility of my own word. To put it simply, yes, it IS ridiculous to label myself an anarchist, or not just simply ridiculous… But if you start probing me what this anarchism is that I am talking about, our conversation will have to go on and on, because this is clearly not a ‘yes’ or ‘no’ type of question… In spite of all that, to repeat it once more, defining myself as an anarchist is like the attempt of a person who is walking in a snow covered field, and who is trying to find a star in the sky that will guide you in the right direction.

That’s why, to speak clearly, before even being an anarchist, I am a free being. Or to rephrase that, I – as a human being – am declaring that I am not going to do what I do not want to do. And in doing that, the sanctions of you people and the government will start from now on, and even if I do not want to fight back, at the same time it is anarchism that I will need to use as a shield for myself in this struggle.

I see no reason – in a legal or even moral sense – to explain to you what is my standard of conscience and the very history of how this was reached, or the truthfulness of this conscience, while I declare that I refuse the military service, according to my own conscience. I am not saying this in a childish way, but it is in fact my conviction. So I enjoy climbing up on a mountain in the morning, or going to the beach when it’s raining, taking a nap after lunch, and picking flowers from the field and putting it in a vase in my room – all these things you can freely do without permission. Not serving the military to me is just like that – a question of one’s freedom. If someone tries to take that freedom away from me, it is that someone who needs to explain why they do it. It is not me who has to explain why I feel happiness when I pick a flower, or guilt while doing so, and all the other emotional exchanges and reasons why I like to display the flowers in a vase once I picked them.

Today the main problem is that after my declaration the legal process will start from now on. Firstly, it is a problem to ask from someone who is conscientiously declaring that they prove their conscience, and secondly, it is a problem that there hasn’t been enough debate to understand why the nation-state (or to say it nicely, the community) is taking someone’s freedom away. This is basically a matter of violence of the nation-state.

So far, I have not been trying to argue that this form of democracy – that of an indirectly ruled democracy – is going to give the world justice and equality. But my position is that I cannot acknowledge the sacrifice that the indirect democracy is asking for. Even if indirect democracy only exists on a very utopian level, it is at the same time based on a very real majority voting system of decision making. In other words, as I repeatedly said earlier, the law that every citizen has to abide to is made by a majority only, and not by everyone. Therefore, the fact that the majority exercises actual force onto the minority – which is the very base of the democratic system – is the greatest violence. Frankly speaking, arresting the body of one offender is not defined as an act of divine punishment, but in fact, it is an agreement made by fifty million people – a whole society -that is uniting against one person to take away the freedom of that person and lock him up. This is a very scary decision. The enforcement of the law is a very scary business. Just saying “because the law says so” brings up the name of the law, and after that we can usually hide behind this name after we mentioned it. The law is our power. The law is our common power, and therefore the execution of that law is not any different than 50 million people doing it with their own hands. So unfortunately according to the boundaries of the law, it can be possible for 25 million plus one person taking away the freedom of the rest.

To say it one more time, the law is a physical enforcement which is supported by the power of every member under the law’s system. If a death sentence can be handed down, it means that the members of society are cooperating in killing one man. But in fact, imprisoning one’s body’s freedom can also mean social death. Sending a trained army to war means that all the killing activities during that war are agreed upon by all the members of the nation. When the police chases people who are about to be evicted over the edge, when the presence of immigration police makes migrant workers jump out off windows, when street vendors are beaten up so hard that they go blind – as all of these are instances happening in the name of the law, which means that this is all done by us ourselves. The power of enforcement that is handed out by the law is very, very frightening. We should not think of it lightly. The military has the purpose of killing the enemy efficiently, and the whole system, the management, the exercising and all the equipment of the military are continuously strengthened to meet that purpose. When we recognize and operate the very frightening military according the law, we can’t just say it is just for our own security. Because the usage of violence – even if we say that it is for our own security and safety, even if the whole world recognizes it legally – its fundamental principle is violence and the threat of violence, of physical violence, even of horrific violence. But if we still want to select that tool (the military), it is never enough that we, as members of society, keep debating and debating it.

As one of the subjects of debate, to tell you my opinion, I think the entire system which gives more power (and rights) to some people but not to others must be eliminated. When we recognize and acknowledge that we all (individuals) have the same rights, I think, this is the realization of anarchism. But then what are equal rights? Can equal rights even make sense? Who decides on those equal rights?