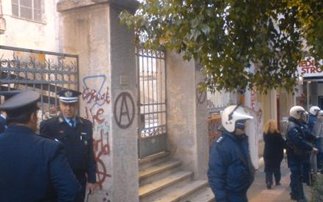 At around 07.30 this morning police raided the anarchist squat Maragopouleio that had been in operation for the past few months in the city of Patras, W. Greece. Ten people were detained and have now been transferred to the local police HQ where the police are trying to force them to sign papers admitting responsibility for the occupation, while it seems that the lawyer who had been called to the spot is not allowed access to them.

More info as it comes.

UPDATE 10.25 AM The ten people arrested at the Maragopouleio squat have now been released. They have all been charged with a misdemeanor (“disruption of public peace”) and will be facing a trial.